6 Horror Films To Get In The Halloween Spirit

With Halloween a little under two weeks away, there is no better time to cozy up on your D-BOX haptic home cinema seat and get yourself ready for the holiday with a horror movie marathon! While there are countless thriller, horror and suspenseful movies available in D-BOX’s catalogue of more than 2,000 titles, we’ve rounded up some of the best ones to give you the big shivers and spooky jumps that you crave at this time of year.

Based on Stephen King’s 1986 novel of the same name, IT tells the story of the small town of Derry, Maine, which is terrorized by a mysterious shape-shifting clown named Pennywise who appears every 27 years to prey on the town’s children.

As the children of Derry start disappearing one by one, a group of seven young kids who have seen Pennywise join together to figure out what needs to be done to stop the clown who torments the town’s children by preying on their fears before ending their lives and feeding on them.

It will be no easy feat and they will have to face their own personal demons in the process, but you can truly feel their terror and tag along with the children of Derry as they fight back against the terrifying clown who lurks at every corner and who appears when they least expect it.

Starring Bill Skarsgård, Finn Wolfhard, Jaeden Martell and more, this 2017 flick is the fifth-highest grossing R-rated film of all time and is guaranteed to keep you at the edge of your seat!

Also, if you dare: IT: Chapter 2 awaits you after you finish this one.

A Halloween classic, 1980’s Friday the 13th is a movie that was believed to have so much potential that it created a bidding war between Paramount Pictures and Warner Bros. Pictures to see who would hold the international distribution rights.

Set at Camp Crystal Lake in New Jersey and starring Betsy Palmer, Adrienne King, Harry Crosby, Jeannine Taylor, Kevin Bacon and more, this classic slasher movie follows a group of young camp counsellors who are working to re-open the camp after a child’s drowning and a brutal double murder had it closed a few years ago.

As the summer kicks off, the evil that haunted Camp Crystal Lake returns with a vengeance and starts taking down the counsellors one by one in extremely gruesome and terrifying ways, leaving those who remain to run for their lives.

Known as the movie that introduced the world to the horror movie icon that is Jason, this thriller is sure keep you guessing until the very end.

Inspired by the novel of the iconic H.G. Wells, The Invisible Man is a thriller that follows a young woman named Cecilia (Elizabeth Moss) after the suicide of her wealthy and abusive ex-boyfriend.

Left with her ex’s enormous fortune, Cecilia attempts to rebuild her life and return to a normal routine when a series of bizarre occurrences leave her to ponder if the multi-millionaire is really and truly deceased.

As these occurrences start becoming more and more lethal and less and less coincidental, Cecilia has to work to convince those around her that she’s being stalked by someone that no one else can see—before it’s too late.

With this 2020 release having grossed more than $142 million despite the digital version being released just three weeks after its theatrical debut, it’s the perfect movie to experience with D-BOX—you’ll truly be able to feel the invisible being that haunts Cecilia.

This 2014 documentary-style horror movie takes you 370 feet under the streets of Paris, where Scarlett, an alchemy scholar, strives to continue her deceased father’s work in locating the Nicolas Flamel’s philosopher’s stone—a substance capable of turning normal metals into gold and of giving eternal life.

When Scarlett (Perdita Weeks), her ex-boyfriend George (Ben Feldman) and friends Benji (Edwin Hodge) and Papillon (Francois Civil) translate a riddle on Flamel’s headstone that reveals the stone’s location deep in Paris’ catacombs, the crew descends into the miles of uncharted, underground tunnels equipped with cameras to document the journey.

Go on this adventure with the cast and feel them journey deeper into every narrow opening as they realize that the catacombs are much more sinister than they originally expected— as in the maze of bones lie dark secrets and horrors, some more personal than others.

This psychological thriller is the first ever film given permission to film in the Parisian catacombs, which consist of 200 miles of tunnels that go five stories underground and that hold the remains of more than 6 million bodies.

Based on the novel of the same name by Jay Anson, this 2005 remake of the 1979 film stars Ryan Reynolds, Melissa George and Philip Baker Hall and follows a young family after they find a beautiful new home in the little town of Amityville, New York.

The family quicky learns of the gruesome murders that occurred in their home a little over a year ago, in which an entire family was viciously killed by their father who claimed to be possessed. The more time goes by, the more the family starts to notice unusual events in their home— leading them to believe the house may be haunted.

In order to get rid of the lost souls, the family then hires a priest. However, as they find out, getting rid of the past is not as easy as it seems.

This new take on an old horror movie classic is the perfect film to get in the Halloween spirit, sending shivers down your spine and making you jump when you least expect to!

After the widely successful A Quiet Place wielded more than $341 million worldwide, this sequel follows Evelyn Abbot (Emily Blunt) as she seeks safety with her three children from the creatures who gruesomely destroy all beings that make noise. With her newborn, son Marcus and daughter Regan in tow, they set off in search of shelter and other humans — who are not all as friendly as they seem.

Starring Blunt, Noah Jupe and Milicient Simmonds, the largely silent cinematographic style of A Quiet Place 2 makes this movie the perfect one to watch with D-BOX haptic feedback—you’ll not only hear any deadly noise, but you’ll feel it too.


Feel all the horrors with D-BOX!

Whether you prefer slasher films, psychological thrillers or supernatural tales, D-BOX has every type of movie you could possibly need to get yourself into the Halloween Spirit! With haptic feedback communicating everything the characters in these thrillers are feeling and experiencing right back to you, there is truly no better way to get ready for October 31st than to set the stage from your living room or home theater. Go on—you have a little under two weeks to go! 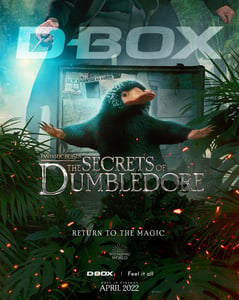