Last Sunday night, the first episode of a Game of Thrones spinoff began streaming around the world! Detailing the rise and fall of the Targaryen family, the show serves as a prequel to the tremendously successful HBO show and is aptly titled House of the Dragon.

Keep reading to learn more about where you can watch this new series, who you can expect to see in it, some fun facts about its production and how haptic feedback will enhance the 10-episode first season!

Where to stream House of the Dragon

While the streaming platform will vary from country to country, it is no surprise that the HBO-created show will live on HBO Max in the United States.

Since HBO Max isn’t available in Canada, Canadians will find it on Crave. In the UK and in other parts of Europe, viewers can tune in to Sky Atlantic to get their Game of Thrones fix!

The cast of House of the Dragon

Since the show takes place before the existence of Daenerys Targaryen and Jon Snow, a new set of faces star in House of the Dragon.

Paddy Considine takes on the role of King Viserys Targaryen—the fifth king to sit on the Iron Throne—after being selected to take over the Seven Kingdoms from his grandfather.

Emma D’Arcy stars as Princess Rhaenyra Targaryen, Visery’s first chid. Since the timeline will hop around a bit during the debut season, Milly Alcock was cast as the young version of Rhaenyra!

Matt Smith plays an experienced dragonrider who happens to be Prince Daemon Targaryen, the younger brother of Viserys.

Olivia Cooke also joined the cast as Lady Alicent Hightower, a woman who was raised to be a part of the kings inside circle. Emily Carey serves as the younger version of Alicent, joining a lengthy cast list of new actors!

To consult the entire list of cast & crew members, check out the show’s IMDB page.

House of the Dragon plot

This new series will chronicle what the Seven Kingdoms were like when the Targaryen family ruled, and the events leading up to the family’s war of succession known as the Dance of the Dragons.

With this time period having more dragons than the time period in which Game of Thrones takes place, you can expect there to be more conflict, more carnage and much more fire—as the legendary Targaryen family fights amongst themselves for the right to be seated on the Iron Throne.

Whilst the main acting crew is different, some key individuals will be returning to work behind the scenes of House of the Dragon.

One of the biggest returning names is that of composer Ramin Djawadi, who will add his legendary music to the entire series—seamlessly plunging viewers right back into the Game of Thrones universe, even if in a different timeline.

Showrunners for House of the Dragon have experience directly multiple Game of Thrones episodes, which will assist in the audience transition.

Finally, the sets (such as King’s Landing) are kept nearly identical to the original series, making it clear that though it’s 200 years earlier, it is still very much the same Targaryen family as in Game of Thrones.

The Winds of Winter

While author Martin could have written the script for the episodes, he detailed on one of his blog posts that he’s being kept busy by many projects including working on his very, very long-awaited Game of Thrones finale; Winds of Winter. He doesn’t want to overcommit himself, further delaying the books’ release!

He also details in many other of his posts that he loves what he’s seen from House of the Dragon, and called it “dark, powerful and visceral, just the way I like my epic fantasy.”

How House of the Dragon will be enhanced by haptics

D-BOX’s team of haptic engineers will work hard to bring you every episode of House of the Dragon shortly after it’s released!

“We’re really excited about this one,” said Emmanuel Racine, Director Haptic Design. “To be able contribute something to the incredibly successful world of Game of Thrones; to help immerse viewers into the land and series they love, is truly special.  On top of it, this was one of our most user-requested series—so It's fun to be able to provide our viewers with the entertainment experiences they want most!”

With haptic feedback, you’ll be immersed in the world of Game of Thrones like never before—you’ll feel every pair of swords striking one another, feel every fight of the dragon riders and feel every back-stabbing twist of a knife. There’s no better way to plunge yourself into the heart of the action than by watching it with D-BOX’s high-fidelity haptic feedback!

A must-see for Game of Thrones aficionados

While there are multiple other Game of Thrones spinoffs in the works, House of the Dragon currently has the eyes of fantasy lovers worldwide on it—as the first show post GoT to come to life, fans are eagerly awaiting to dive back into the world of intricate family feuds, blood and power!

With 10 episodes being released on a weekly basis, there’s no better way to make the show more exciting than by watching it in your D-BOX home theater—you’ll feel as if you’re right in the show, in the middle of King’s Landing! 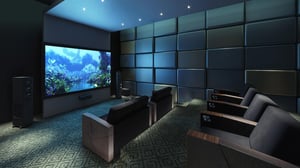