FLIGHT SIMULATIONS FOR THE FUTURE

Behold a visionary pilot’s quest to take aviation training to the next level. Jayson Baron’s passion is teaching others to fly, and, for existing pilots, to improve their proficiency and skill sets. This 29-year / 20,000-hour Captain for United Airlines saw firsthand how airline pilots benefit from simulation training and understood the historical reasons why civil (or General Aviation – GA) pilots trained mostly in the air. His mission now is to serve as an agent-of-change for a paradigm shift in the GA training model. With help from D-BOX, a commercial airline pilot is turning a flight-training paradigm on its head.

Baron believed that flight simulation would have so much to offer GA pilots. Unlike the real thing, simulators allow users to fully immerse themselves in situations without risking the safety of themselves or anyone else. “You can’t do in an airplane what you can do in a simulator,” he stated.

“Airline pilots have had 100% of their training in flight simulators for the past two decades. The first time I touched the controls of a Boeing 767-400, there were 250 people sitting behind me”
Jason Baron, former United Airlines Captain 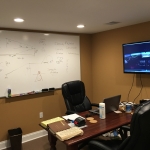 In an effort to change things, Baron set out to build a flight simulator specifically for aviators who don’t fly commercial flights. He transformed his Easton, Pennsylvania basement into an airline-styled simulator training facility called Lehigh Valley Flight & Racing Simulations, which he opened in the spring of 2016.

“I want to train pilots to the highest level,” he explained. “My goal is to change the General Aviation flight training paradigm.”

To train GA pilots like airline pilots, Baron searched for a flight simulation tool and a business partnership that would serve as the foundation for the forthcoming paradigm shift which he fully intended to broker and facilitate. He chose a Precision Flight Controls (PFC) simulator, which provides the level of motion, visual, control fidelity and realism found in the Level-D full flight simulators utilized by airlines and other professional pilot communities (military, charter, corporate, etc.). The simulator had to be able to replicate in real-time abnormal and emergency situations. These could include changes to visibility and all kinds of system malfunctions that are too dangerous to try in a real plane.

Baron’s search for high-fidelity motion simulation brought him to D-BOX. It was love at first sight.

“I fell in love with D-BOX,” he said. Right away, Baron saw how D-BOX’s top-tier motion-cueing system could integrate with his simulator to trigger cognitive reactions to touch and balance.

In fact, Baron credits his love of PFC simulators with their use of D-BOX’s actuators. The combination provides airline-level scenario-based training so that users can navigate through multiple failures during flights. 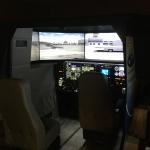 Also raising the bar for simulation and training is real-time Air Traffic Control from Pilot Edge, which integrates into the simulator through a web distributed network. In the past, flight instructors pretended to be air traffic controllers by reading scripts. With real-time air traffic control, Baron’s users can learn how to interact with controllers and pilots on the radio.

“Even for a 20,000-hour expert pilot like myself, having air traffic control in the simulators is a whole new level of reality,” he explained.

With D-BOX’s high-fidelity Motion System added to the PFC simulator, Baron can also reconfigure at the touch of a button 43 different single and multiengine airplanes — from small Cessnas to Citation jets and turboprops. — “I love the fact that I can put D-BOX in different types of airplanes and let pilots fly a more complex equipment than they would in real life and do higher-level training.” So far, 150 airline/corporate/charter pilots have test-flown the simulator modified and deployed by PFC, in concert with Baron’s requirements.

“The professional pilots who have flown it unanimously confirm that it feels like a Level C or D simulator and that the fidelity motion-cueing is amazing. We all feel like we’re in a real airplane.”
Jason Baron, former United Airlines Captain

All those who know Baron will readily attest that his visionary skills are a major enabling factor for his big plans for Lehigh Valley Flight & Racing Simulations. In addition to instructing, he will open his doors to other kinds of events such as team-building activities for corporate groups and birthday parties. He would also like to expand to a commercial facility in the future. Larger projects — like motion-cueing simulators for 737s — are in the works, as well.

For Baron, it’s a dream to take simulation to the next level. And it’s on the horizon — just ahead.

Want to fly the skies in an ultra-realistic haptic simulator? 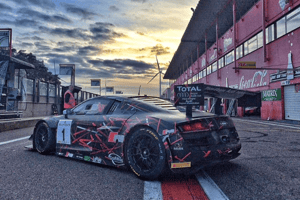