D-BOX could not have grown into the international business that it is today without the help of its amazing network of partners that spans across multiple business sectors. While we’re always proud of the business we’ve become and of the partners we’ve worked with over the last 25 years, we’re always extra proud when we can celebrate the partners with whom we have a longstanding relationship!

Recently, it was our great pleasure to receive Thomas Rüttgers of Ecco Cine Supply at our head office in Montreal, Canada. During his visit, we were excited to present him with a plaque celebrating our 10 years of partnership—though in reality, our relationship with Rüttgers goes back even further than that!

While he was in town, we took the time to catch up with him about the D-BOX & Ecco partnership. Keep reading to discover what he had to say about his experience over the last 10 years with D-BOX! 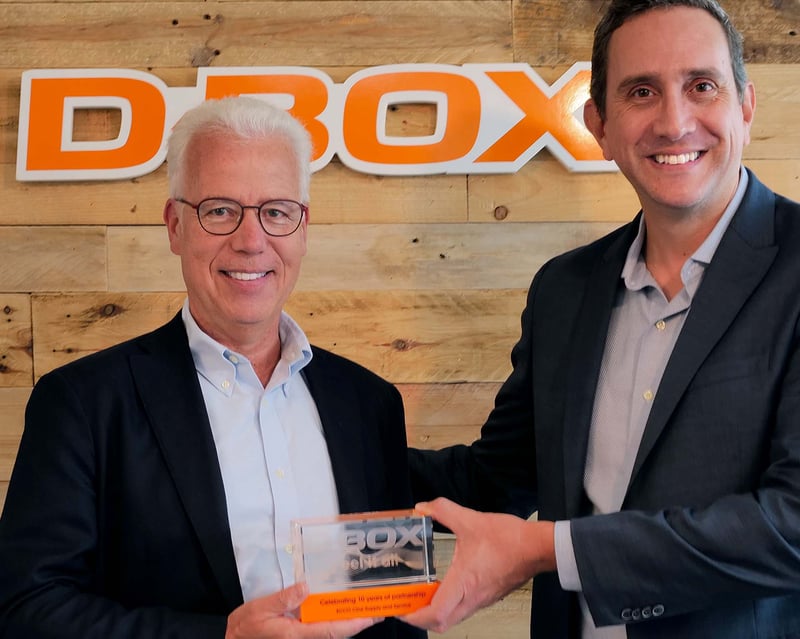 Why do you think the Ecco & D-BOX partnership has been so successful?

For our partnership, what’s been really important is to make time to physically see each other. Oftentimes we just see our partners in shows and conventions, but with D-BOX, we make sure to see each other at least twice per year outside of these types of events!

This willingness to visit one another not only reaffirms our commitment to each other as partners but is also important because it allows us to learn from each other and to grow our businesses together. Back when I was a consultant for D-BOX, prior to founding Ecco, I was close to D-BOX founders & then CEO Claude McMaster and Pascal Rioux, while more recently I’ve developed outstanding relationships [with] D-BOX’s current sales & development teams.

What made you turn towards D-BOX?

Back in the day, when I first encountered D-BOX in Los Angeles, I knew right away that this was a technology that would be successful in the theatrical industry. After later attending CinemaCon in Las Vegas and meeting Claude McMaster for the first time, I was inspired to fly out to the D-BOX head office in Montreal a week later! This is where I first spoke at lengths with McMaster about the different opportunities.

To me, it was also clear that motion was the next big thing. We were in the era of 3D so I knew that 4D came next, and D-BOX’s immersive motion plays a huge role in offering that elevated, premium and 4D theatrical experience.

After selling my family business, I eventually became a consultant for D-BOX—and when I founded Ecco, I made it a priority to keep our business relationship as strong as ever. Some of the first theaters we introduced D-BOX to about 12 years ago are even still relying on the original hardware, proving that not only do moviegoers keep coming back for more, but that the technology is reliable, robust & solid!

Where do you see the D-BOX & Ecco partnership going in the future?

With our long history and partnership, there are endless possibilities for where we could go. We’ve already come such a long way—we started by expanding the D-BOX footprint in German-speaking territories with 170 screens in Germany (a number that is growing steadily by 10-20 screens every year), and from there we expanded to other countries such as the United Kingdom, Turkey, Egypt, Austria, Norway and South Africa!

In the future, I truly believe that Ecco will become a central point for D-BOX in Europe. We will just continue to expand, to learn from one another and to grow as both businesses and as partners.

A long-standing partnership with a decade of success

As an international business who has developed a footprint in more than 40 countries over the last 25 years, D-BOX is always proud to celebrate partners such as Ecco Cine Supply who have grown alongside us and whose partnership helped us to thrive.

If you would like to learn more about Ecco’s partnership with D-BOX and see how D-BOX could help your business grow, be sure to read our case study on the topic!