5 D-BOX Movies to See with your Family this Summer

With the school year now done and with the start of summer vacation, families everywhere are looking for ways to spend time together and to entertain their children without breaking the bank— and we all know there’s no better way to do that than by going to the movies! After more than a year of at-home family movie nights, theaters around the world are ready to welcome families back into their halls for budget-friendly entertainment. 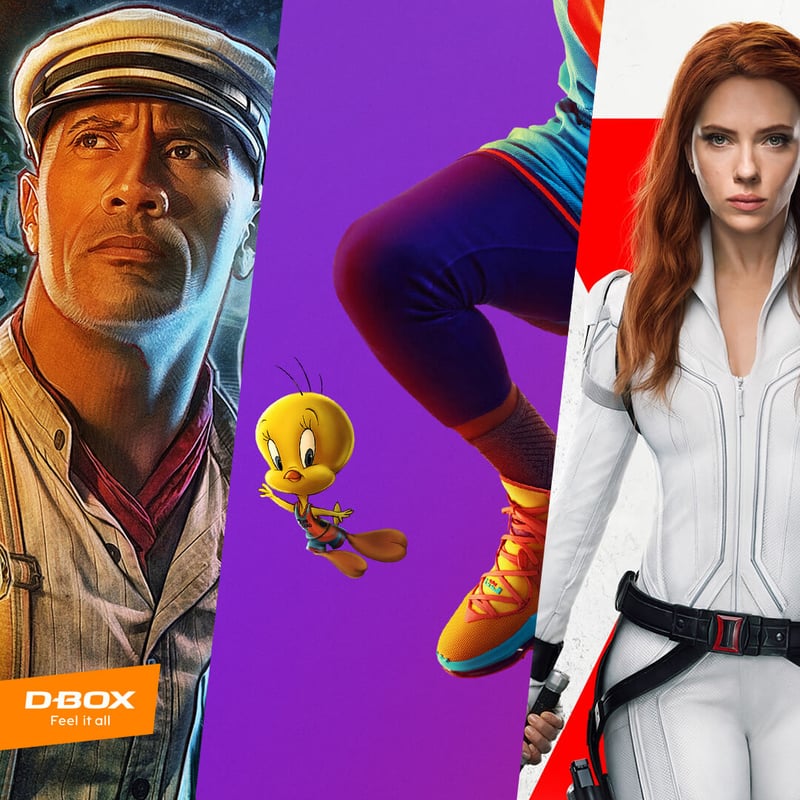 If you’re looking to treat your family to a premium movie experience this summer, be sure to check out these five family-friendly movies hitting a D-BOX theater near you in the coming months.

As the latest female Marvel superhero to get a standalone film, Scarlett Johansson stars as Black Widow in this newest chapter of the Marvel Cinematic Universe that dives into the long-awaited origin story of the mysterious Natasha Romanoff.

With the events of Black Widow taking place before those of Avengers: Infinity War but after Captain America: Civil War, your family will be completely immersed in the origins of this powerful heroine. Will she be able to revisit her past as a spy and confront all the people she hoped to keep in the past in order to take down the relentless Taskmaster? Reserve your D-BOX tickets and find out as of July 9! In the meantime, get yourself excited for this movie by checking out the D-BOX exclusive movie poster.

After his son is kidnapped by an evil computer algorithm called AI-G-Rhythm, Lebron must race to assemble an elite team Warner Bros. characters to win him back on the basketball court. With famous characters from a wide range of generational shows such as the Flintstones to Scooby Doo and with an impressive lineup of actors & NBA stars such as Don Cheadle, Zendaya and Anthony Davis, this family movie is sure to please all who participate in the big game in D-BOX and is sure to bring plenty of laughs to moviegoers everywhere. Check out the clip below to hear Lebron talk about his love for Bugs Bunny growing up and to hear about how excited he is to re-introduce the Looney Tunes gang to today’s generation of kids!

Based on the famous Walt Disney theme park attraction of the same name with the endlessly entertaining skippers, Dwayne Johnson and Emily Blunt star in the theatrical version of this tale that sees Frank (Johnson) take Dr. Lily Houghton (Blunt) and her brother (Jake Whitehall) on a mission to find the Tree of Life, rumoured to have incredible healing powers.

Along the way the adventurers face constant dangers in the form of snakes, piranhas as well as a competing German expedition.

Set sail towards family-friendly action, adventure and humour aboard the Jungle Cruise when it hits theaters and D-BOX on July 30.

After becoming desensitized to the stream of flying bullets, bank robberies and explosions that occur near him multiple times per day, Guy starts questioning the real reason for all the action around him—and that’s when he learns the truth about the world he lives in and makes the brave decision to join the game in an attempt to change the way it’s played for the better.

Join Guy on his journey to save his town and better his community when Free Guy hits theaters and D-BOX on August 13!

After having been trained by his father to be a lethal assassin his whole life, Shang-Chi takes the brave decision to leave his family behind to start a new, violence-free life. However, he is forced to confront his past when he gets caught up with the mysterious Ten Rings organization — the same group behind Tony Stark’s attempted kidnapping in the first Iron Man film.

Starring Simu Lui as Shang-Chi, Awkwafina as his friend Katy and Tony Leung as Shang-Chi’s father Wenwu, this action-packed film is gearing up to be a Marvel kung-fu masterpiece that can be experienced in D-BOX theaters everywhere as of September 3

Whether you’re looking for a way to get everyone out of the house this summer or for a way to spend a rainy afternoon together as a family, these five movies are sure to please everyone in your family! Reserve your tickets in D-BOX today to take the level of fun and immersion to a whole new level that your kids are sure to love.