On Wednesday June 29 2022, D-BOX brought the future of high-fidelity haptic technology to the Canadian Embassy in London, England!

During an invitation-only media event, D-BOX showcased their latest sim racing technology and introduced the attendees to their long and successful history of revolutionizing the way the world experiences entertainment through their pioneering haptic technology.

Through demonstrations from D-BOX ambassador and World Rally Championship driver Louise Cook, corporate presentations and through attendees getting the opportunity to get behind the wheel of on-site simulators themselves, D-BOX’s time in London made one thing very clear: haptic technology is without a doubt helping to bridge the gap between reality and simulation for drivers everywhere.

Keep reading to discover a surprise announcement that was made during the event and to learn how D-BOX’s haptic technology can be beneficial for both amateur and professional drivers alike! 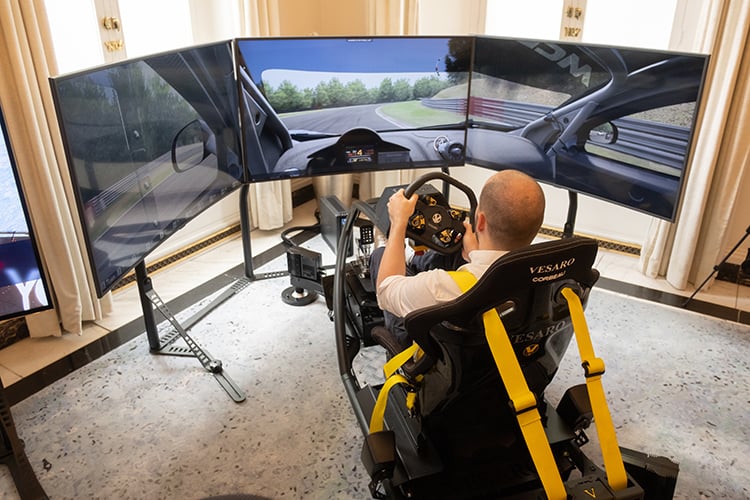 THE LATEST GENERATION OF HIGH-FIDELITY HAPTICS

First on the agenda was the unveiling of the latest & greatest sim racing haptic technology, making event attendees among the first in the world to see and try D-BOX’s G5! A step up from G3, the fifth generation of D-BOX’s haptic technology comes loaded with the latest market innovations to further immerse users while still providing the extremely precise, high-fidelity haptic feedback that D-BOX is known for. 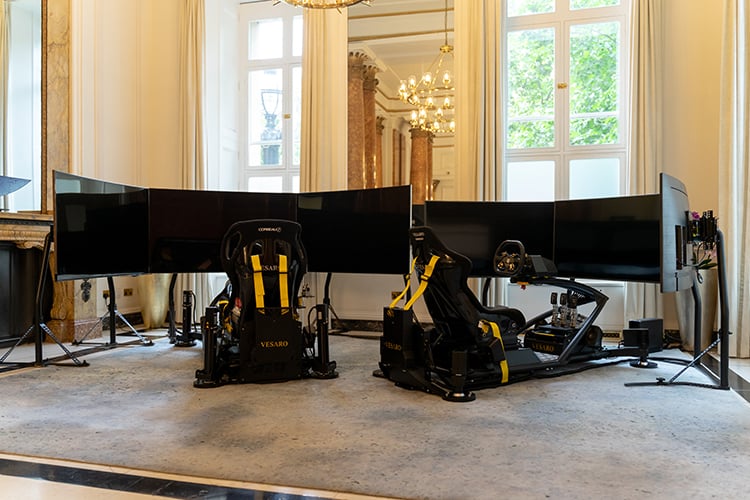 With some of the main changes being an overhaul of the system’s infrastructure and a more compact design, G5 is able to offer users much more flexibility as well as a much simpler integration process. Featuring a single, smaller processor, an easy ethernet connection and a simple switch to change between 230V and 110V, G5 offers sim racers considerable space gains, less wiring and a cheaper price for racers!

With an in-depth system configurator and access to D-BOX’s ever-growing library of more than 2,200 movies, TV shows, games and more, G5 is able to provide users with the most personalized & realistic haptic entertainment experiences on the market.

While attendees benefitted from a sneak peek at G5—our latest haptic system—and from demonstrations & conversations with Louise Cook, they were also on-site for a surprise announcement: D-BOX’s sim racing haptic technology is becoming more accessible to people of all ages thanks to a partnership with Vesaro, resulting in Kindred Concepts centers being equipped with 60 racing simulators featuring D-BOX haptic technology!

Kindred Concepts entertainment centers provide sim racers with an immersive, high-quality Formula 1 racing experience that has been gamified for mass audiences in a license agreement with Formula 1. Vesaro—a British designer and manufacturer of racing simulators—will design, engineer, and build the racing simulators that meet the high standards of the Formula 1 organization, and D-BOX will provide the ultra-realistic haptic feedback.

Not only are these centers the firsts of its kind, but D-BOX & Vesaro aren’t wasting any time: the first will be installed in London, England by the end of 2022, with potentially as many as 30 venues worldwide over the next five years!

BRIDGING THE GAP BETWEEN REALITY & SIMULATION

The simulators that will be in the Kindred Concepts entertainment centers differ from recreational arcades because of the realism that D-BOX provides. When you combine a state-of-the-art simulator with unique sequences of movements, vibrations and textures, you get a sim racing experience that’s as close as physically possible to being behind the wheel of a real car!

For example, D-BOX haptic simulators provide drivers with granular, subtle feedback perfected over 20 years of experience that translates into precise and realistic cues for drivers such as traction loss, oversteer, understeer, brake ware and more. Racing—whether simulated or on a real track—is a sport of milliseconds, and these cues can be the difference between a first-place finish and a fourth place one. The sooner the driver can be alerted to potential issues either on the track or with their vehicle, the better they’ll be able to perform!

Haptic feedback in high quality simulators essentially acts as a new layer of information going through your entire body, successfully immersing drivers and bridging the gap between reality & simulation. As a result, haptic simulators can be used for professional sim racing, or as a training tool for professional real-track drivers!

For professional rally driver Louise Cook, a D-BOX haptic system has become an integral part of her training regimen.

“Since adding the technology to my sim, I have definitely felt more immersed and so much more like I’m driving rather than just gaming,” she explained. “It’s less thinking and more doing. It’s strange and hard to explain, but when you get the setting right you don’t even notice the simulator working. It just feels like it should when driving! To feel your brain go back to a state that it was in at the last rally and to have that association on a simulator is pretty incredible.”

What Louise explained during the event sums up the symbiosis between man and machine that only haptic technology can provide. This symbiosis has many benefits for professional drivers using sim racing as a training tool, such as keeping the mind sharp when drivers can’t get behind the wheel of a physical car!

“It keeps all of my pathways nice and sharp, rather than declining in the gaps between being out of the real car,” she said. “It gives you the ability to assess your driving more, develop your driving and gives you the opportunity to find-tune, which is really hard to do in a rally car with everything that’s going on.”

Describing her simulator with D-BOX haptics as “alive,” Louise believes that events like the one held in London are important to demonstrate exactly just how alive they can become.

“It’s really hard to explain the feeling and it’s something you have to experience for yourself to understand, so the more people that can get their hands on the latest sim racing products, the better,” she said.

THE FUTURE OF SIM RACING

While D-BOX’s latest innovation will take the world by storm, there’s already a lot to look forward to in the future of sim racing.

These centers will help make high-fidelity training tools accessible to drivers of all types and budgets, meaning that the sport can attract a wider audience and a wider array of drivers. Plus, the realism of D-BOX haptic systems means that drivers of all levels can push themselves to the max without worrying about scrapping their vehicle—should they try a risky manoeuvre and crash, they can simply reset the software and try again!

While growing motorsport will not come easy, D-BOX is committed to bringing its haptic technology to as many people as possible all over the world through events such as the one held in London, through entertainment centers such as Kindred Concepts, and by bringing awareness to the benefits of haptic technology for sim racers and real racers alike. The more people they can reach, the more the sport will grow—and the more it will change the future of motorsport forever.

Check out what people had to say about the media event here:

Traxion.gg also wrote an article that can be found on their website. 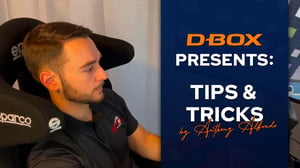